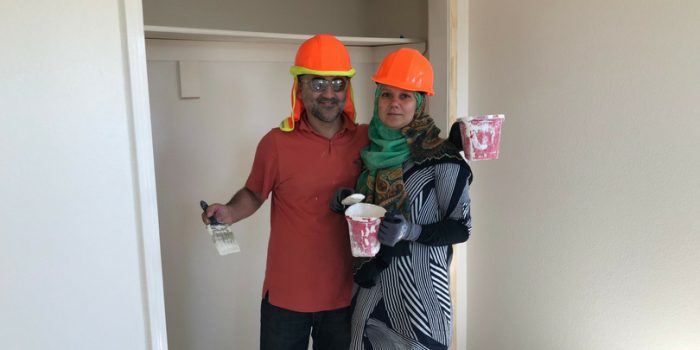 Meet Ahmad and Brishna, proud first time soon-to-be home owners of the House that ReStore Built which will be completed next spring.

In 2014, Brishna and Ahmad along with Ali and their second son, Salik, left Afghanistan and escaped to India, where they stayed for 50 days before receiving a visa to Ecuador as asylum seekers. They lived in Ecuador for a year and a half. It was an interesting and challenging time; they did not speak Spanish and struggled to find work. Though Ahmad found a part-time job at a restaurant, he still had to cook food in their home to sell on the streets for extra money.

On October 12, 2016, their family moved to Albuquerque after receiving official refugee status by the United Nations. “Now that we are in the United States, we feel safe and secure for the first time in our lives. We have been able to develop our finances, prepare our kids for school, and focus on establishing a happy and healthy life for ourselves,” said Ahmad. Both Brishna and Ahmad have found jobs and just recently welcomed a daughter, Afah, into their family.

“We are grateful for the new opportunities that we have had and to be able to put our pasts behind us and focus on having a successful future here in Albuquerque. We are thankful for all the help we have received from various people and organizations, including the opportunity to partner with Habitat for Humanity to build a house for our family,” said Ahmad.

Learn more about the House that ReStore Built and Ahmad and Brishna’s story.