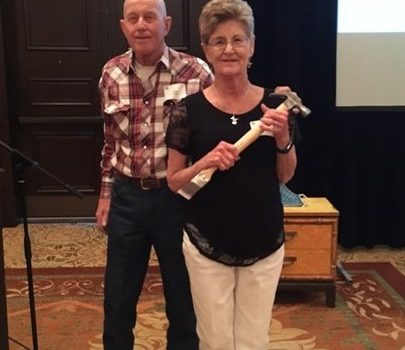 Bob and Barbara Rieden give much more than time to GAHH, as volunteers for the past 13 years, they have not only supported the building of dozens of homes for low-income families, they have witnessed first-hand the drive and passion necessary to keep Habitat builds going strong.

As an integral part of the Special Work Assignments Team (SWAT), Bob and Barb have donated more than 10,000 hours of time and hard work.

Bob and Barb give all the credit to their 40 person team of SWAT members, who show up rain or shine to get the job done. “I couldn’t get anything done without Hence and all the others down at the site,” says Bob, “It’s a team effort. This isn’t about me, it’s about all the men and women who make it work.”

Ask Bob about his time with SWAT and he says it’s about camaraderie – all the guys out there are used to working and when they retire they still want to be useful. “Rather than get together to have breakfast on a Saturday like some older guys do, those of us on SWAT get together to build homes,” said Bob.

Bob graduated from a technical school in Chicago, got married to Barb and moved to New Mexico to work for Sandia National Laboratories in 1962. “We didn’t know a soul,” said Barb. But the two grew to love New Mexico, making close friends and raising two children. For many years, Bob worked during the day and went to school at night, eventually earning a master’s degree. He kept moving up in the ranks at the Lab where he would manage groups of 15 to 30 employees. No doubt, this is where Bob earned the leadership skills that have come in useful down at the Habitat job site.

Bob helped on a couple of builds for Habitat in the ‘90’s, but it wasn’t until several years after he retired from Sandia Labs that he really got involved. In 2003 Bob jumped in and by 2004 Barb was volunteering with him. “My husband and family come first,” said Barb. “I like to get involved with whatever Bob is interested in and passionate about and try it out for myself. It’s been great to volunteer together.”

Bob’s passion and leadership skills claimed him the volunteer title of Team Leader. Bob orchestrates the entire build including the SWAT – he tracks every stage of the build, knows what activities can be accomplished on a given day, makes sure the materials are there and ready, organizes SWAT members as well as coordinates the specific volunteer jobs for each build. His input and work is invaluable to ensuring everyone’s time is used effectively.

Bob gives great credit to Barb for helping him achieve and participate in his varying pursuits saying, “I can’t do it myself, you have to have a strong marriage to do all the stuff you want.” He goes on to say, “I just get more and more involved and more into my activities, but doing it together is what makes it work for our marriage.”

During the 2017 Raising the Roof Breakfast, Bob and Barb Rieden were honored for giving so much of their lives and their hearts to the Habitat mission. It’s a wonderful gift they have given to our community over the years. As true leaders, this couple who has devoted several days a week for the past decade to helping others insists that this honor is not theirs alone, but it is for every SWAT member.

“I do enjoy it,” said Bob. “There would be something missing in my life if I didn’t have those friends out there on the job site.”

And there would be something missing if we didn’t have Bob and Barb on our side. Thank you both for your generosity, your dedication, your leadership and your friendship.