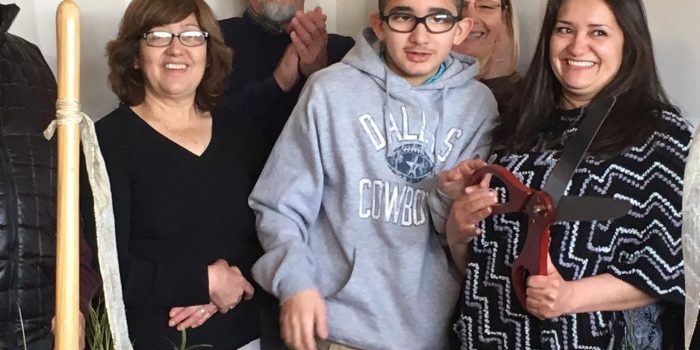 On Saturday February 11th the House that SWAT Built in memory of SWAT member and long time friend of Habitat Dave Ericson, was dedicated and the keys were handed over to new homeowners Sonia and her son Angel.

Among her many words of appreciation Sonia said, “My number one goal and now accomplishment has been to own my own home. It’s been an honor working with all of these volunteers. I have learned a lot of things. If it wasn’t for SWAT there would be no build. Thank you all.”

During the ceremony a plaque was dedicated to all the SWAT (Special Assignment Work Team) volunteers who have passed away. This group of hard working men and women are the backbone of our volunteer program and without them we simply would not be able to build homes for low-income families. SWAT is a core group of about 40 members who show up, rain or shine, every build day.

Bill Reilly, Habitat Construction Manager, closed out the ceremony by adding a few words about Dave Ericson, whom the house was dedicated to, saying, “As I got to know Dave over the years I knew that he wasn’t afraid to ask the hard questions when he had his Habitat Board of Director hat on. And when he didn’t have his board hat on, he was a kind, gentle man. When Dave stood behind you he would give you words of encouragement, and when he stood beside you he would support you and when he stood in front of you he would protect you.” Bill added, “These keys that open Sonia and Angel’s house represent all the encouragement and support and protection that Dave stood for. Congratulations!”

Thank you Pat for being a champion of Habitat’s mission