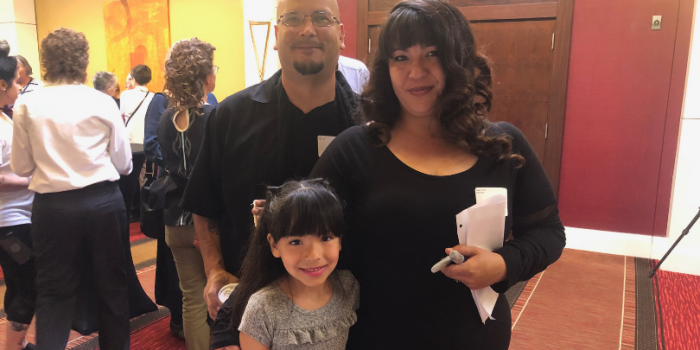 Bank of Albuquerque Mortgage put their belief in the importance of Habitat’s mission to help low income families achieve homeownership by creating the Outstanding Homeowner Award. They committed to honor two families each year who stand out and strive to keep their dream alive. “We are honored to have Bank of Albuquerque as sponsor of this award and thank them for giving back to the community and being a part of our event,” said Joan Costello.

“We are in the business of helping people achieve their dreams and their long-term financial goals,” said David J. Garcia, Senior Vice President and Regional Manager for Bank of Albuquerque. “Our community is our livelihood. For that reason, we believe in giving back every day and in many different ways. Serving our community is more than a commitment, it’s our culture.”

The award recognizes outstanding homeowners for going above and beyond their basic commitment to Habitat. “The individuals who receive this award have shown outstanding efforts to excel once they have purchased their home, as well as their efforts to overcome challenges that may pose a threat to the stability they worked so hard to achieve,” said Joan Costello, Executive Director of Greater Albuquerque Habitat for Humanity.

Thank you Pat for being a champion of Habitat’s mission