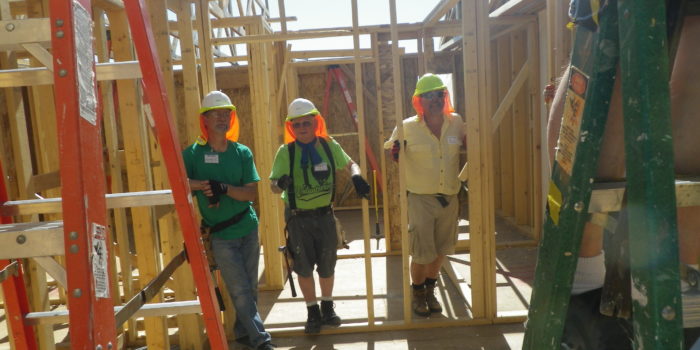 What do you get when you put a bunch of smart, capable, reliable, do-gooders to work building affordable homes?

For the Greater Albuquerque Habitat for Humanity the answer is easy – SWAT.

The Special Work Assignment Team, affectionately known as SWAT, is undeniably one of our strongest allies in our mission to build affordable homes. This year alone, SWAT members have worked nearly 8,000 volunteer hours.

I had the privilege of chatting with a few of our illustrious SWAT volunteers at the Mesa del Rio build site last week. We only talked briefly during a lunch break, but it was clear to me that friendship, trust and camaraderie were the key ingredients to keeping this group of volunteers coming back week after week and year after year.

As soon as we started talking, one SWAT member let me know that, “69 is the average age of a SWAT volunteer.” And it’s true, the group is made up of an eclectic team of do-gooders like Ed, a retired Maintenance Manager who has been a SWAT volunteer for a couple of years. He used to volunteer on church missions and when he decided to look for a new opportunity he called us. Once he started building homes, Ed said he just kept showing up week after week because he enjoys working with his fellow SWAT members. When asked why he likes building homes Ed told me, “You’ll live longer. You either use it or lose it.” And the best part of the job? “It’s always fun to watch someone get a house,” he said.

Another SWAT volunteer I had the chance to chat with was Blaine, a retired Maintenance Manager from CNM. Although relatively new to SWAT he echoed the same sentiment I kept hearing and sensing among the group that day, “It’s about community participation.”

I spoke with Barry, a retired HR executive from New York who saw a commercial for Habitat International and was moved to volunteer. He participated in their Global Village which took him to Taos to build homes. After that experience he was hooked and began building with Habitat in his hometown in New York. Once he relocated to Albuquerque, it didn’t take long before he was volunteering with us and was initiated into SWAT. According to Barry, “This is fun. It’s work for some people, but to me this is fun.” 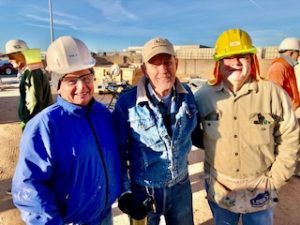 One last SWAT member I was lucky to talk with before lunch was over and everyone hurried back to their assigned task was Bob. He was recruited to SWAT 12 years ago by a colleague and friend, Irv Hall, a long-time habitat supporter and SWAT member. When asked why he stuck around volunteering all these years, Bob said, “I like the people I work with. It’s a great group and I enjoy being out here with these guys.”

Building a home takes many hands. Each dedicated SWAT volunteer seems to know that they are part of something great that gives them the opportunity to make friends, build trust and foster camaraderie.

Just this past year GAHH honored the SWAT members by naming one of the new construction projects “The House that SWAT Built.” And in true SWAT fashion, this group of caring volunteers decided to dedicate the SWAT house to the memory of their longtime friend and fellow SWAT member Dave Erickson.

It’s truly amazing what happens when well intentioned, honorable people come together. There are no amount of “thank you’s” that can repay their effort, time and dedication, but we’ll keep saying it – Thank You SWAT! 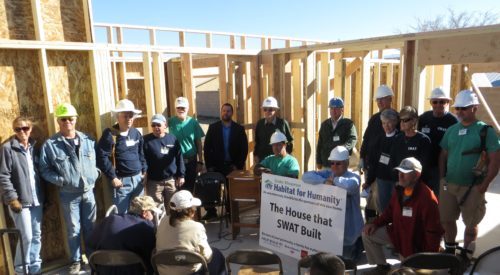